Why You Should Fix Water Damaged Ceiling

Have you ever found a damp area in your house and wondered if there is a potential leakage? Ceiling contractors Perth are always advising homeowners to have their house inspected before undergoing any plaster ceiling repair in order to detect the root cause. If you overlook the regular inspection, the problem may not be fixed and the possibly could get worse over time.

You can notice a damaged roof through observing several indicators that happen to appear in your house, such as a stained, sagging ceiling, or peeling paint on the ceiling drywall. It can also be a clear sign if you notice any puddling. However, the existence of these signs might not necessarily be due to a damaged roof, and the issue may instead be from something inside the house, such as a plumbing leak or a shower that was installed incorrectly. You may try to do plaster ceiling repair without fixing the problem, but this isn’t advisable. The longer the issue stays, the more likely it will secretly and slowly destroy your house. 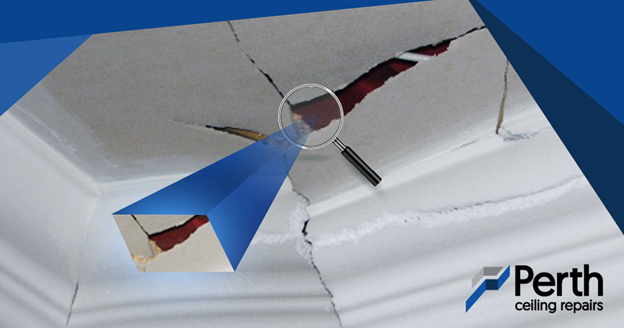 How Could Water Damaged Ceiling Happen?

You are probably questioning what could cause leakage to happen in your house and damage your ceiling. There are several things that you could be cause for concern when it comes to a water damaged ceiling. These include climate, natural events like floods and storms, and building or structural issues that may occur because of poor workmanship. The structural issue most likely won’t happen if you have chosen qualified ceiling contractors Perth. Hence, if the damage is still repairable, you may opt for plaster ceiling repair to reduce the risk of structural damage.

The water damaged roof and ceiling can impact your house badly and endanger the safety of everyone. Water damaged ceilings can lead to dampness and sagging. If the roof or ceiling is made up of wood and has been exposed to water for a long time, it will start chipping and affecting other parts of the house, causing a larger issue one day.

This could put your safety at risk as it could collapse anytime undermining the structural integrity of the whole house. Plaster ceiling repair maybe works if the issue is still minor, however, if the issue is already out of the control, you should contact the ceiling contractors Perth to save your house from getting more damaged.

While water damaged ceiling can threaten the immediate safety of your family, it can also affect your health. This is because the dampness will provide the conditions necessary for mould to grow. Mould will then release tiny, invisible particles called spores which can spread through the air and can be harmful.

The Department of Health, as well as the World Health Organization (WHO) state that the exposure of dampness or mould is associated with asthma, mould infections and allergic alveolitis. You may remove the mould yourself by using vinegar or detergents and washing the area with soft fabric, but if you don’t repair the source of the damage, it is positive that mould will just keep on growing back in the damp area.

In conclusion, it is truly dangerous to live in a property with a water damaged ceiling. Make sure you get maintenance done regularly and seek Perth Ceiling Repairs, a professional ceiling contractors Perth for assistance when you need an advanced inspection or plaster ceiling repair. Contact us today to learn more.

EMAIL US CALL US NOW